Home > Humanities and Sciences > Environmental Studies > A Walk Through Time > 20 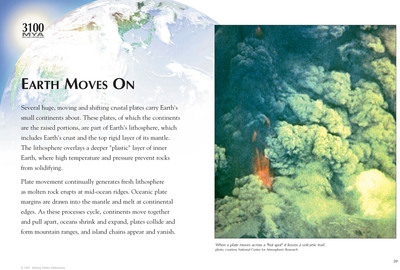 Several huge, moving and shifting crustal plates carry Earth's small continents about. These plates, of which the continents are the raised portions, are part of Earth's lithosphere, which includes Earth's crust and the top rigid layer of its mantle. The lithosphere overlays a deeper "plastic" layer of inner Earth, where high temperature and pressure prevent rocks from solidifying.

Liebes, Sid; Mittelstadt, Laurie; Waugh, Barbara; and Brynes, Lois, "Panel 20: Earth Moves On" (1997). A Walk Through Time - From Stardust To Us. 20.
https://scholarworks.umt.edu/awalkthroughtime/20