Home > Humanities and Sciences > Environmental Studies > A Walk Through Time > 28 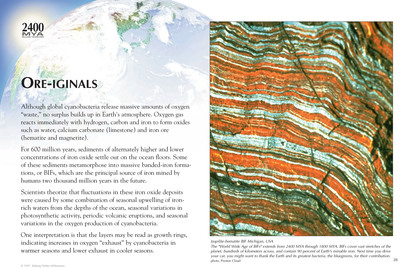 Although global cyanobacteria release massive amounts of oxygen “waste,” no surplus builds up in Earth's atmosphere. Oxygen gas reacts immediately with hydrogen, carbon and iron to form oxides such as water, calcium carbonate (limestone) and iron ore (hematite and magnetite).

For 600 million years, sediments of alternately higher and lower concentrations of iron oxide settle out on the ocean floors. Some of these sediments metamorphose into massive banded-iron formations, or BIFs, which are the principal source of iron mined by humans two thousand million years in the future.

One interpretation is that the layers may be read as growth rings, indicating increases in oxygen “exhaust” by cyanobacteria in warmer seasons and lower exhaust in cooler seasons.

Liebes, Sid; Mittelstadt, Laurie; Waugh, Barbara; and Brynes, Lois, "Panel 28: Ore-iginals" (1997). A Walk Through Time - From Stardust To Us. 28.
https://scholarworks.umt.edu/awalkthroughtime/28