Home > Humanities and Sciences > Environmental Studies > A Walk Through Time > 5

Panel 04: Pulse Of The Spheres 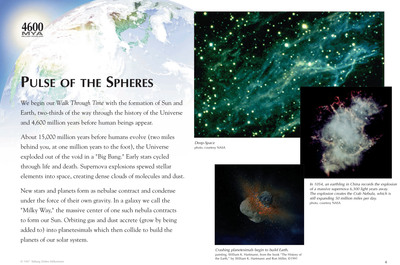 We begin our Walk Through Time with the formation of Sun and Earth, two-thirds of the way through the history of the Universe and 4,600 million years before human beings appear.

About 15,000 million years before humans evolve (two miles behind you, at one million years to the foot), the Universe exploded out of the void in a "Big Bang." Early stars cycled through life and death. Supernova explosions spewed stellar elements into space, creating dense clouds of molecules and dust.

New stars and planets form as nebulae contract and condense under the force of their own gravity. In a galaxy we call the "Milky Way," the massive center of one such nebula contracts to form our Sun. Orbiting gas and dust accrete (grow by being added to) into planetesimals which then collide to build the planets of our solar system.

Liebes, Sid; Mittelstadt, Laurie; Waugh, Barbara; and Brynes, Lois, "Panel 04: Pulse Of The Spheres" (1997). A Walk Through Time - From Stardust To Us. 5.
https://scholarworks.umt.edu/awalkthroughtime/5