Home > Humanities and Sciences > Environmental Studies > A Walk Through Time > 52 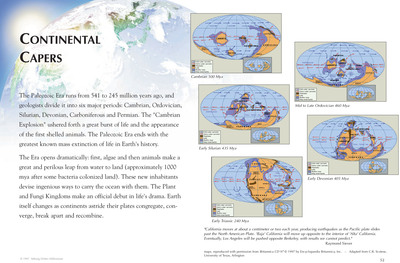 The Paleozoic Era runs from 541 to 245 million years ago, and geologists divide it into six major periods: Cambrian, Ordovician, Silurian, Devonian, Carboniferous and Permian. The "Cambrian Explosion" ushered forth a great burst of life and the appearance of the first shelled animals. The Paleozoic Era ends with the greatest known mass extinction of life in Earth's history.

The Era opens dramatically: first, algae and then animals make a great and perilous leap from water to land (approximately 1000 mya after some bacteria colonized land). These new inhabitants devise ingenious ways to carry the ocean with them. The Plant and Fungi Kingdoms make an official debut in life's drama. Earth itself changes as continents astride their plates congregate, converge, break apart and recombine.