Home > Humanities and Sciences > Environmental Studies > A Walk Through Time > 70 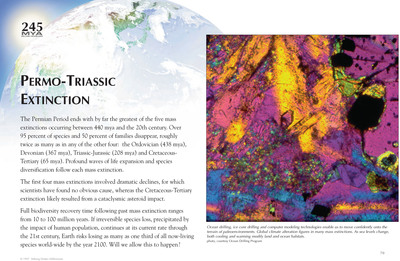 The Permian Period ends with by far the greatest of the five mass extinctions occurring between 440 mya and the 20th century. Over 95 percent of species and 50 percent of families disappear, roughly twice as many as in any of the other four: the Ordovician (438 mya), Devonian (367 mya), Triassic-Jurassic (208 mya) and Cretaceous-Tertiary (65 mya). Profound waves of life expansion and species diversification follow each mass extinction.

The first four mass extinctions involved dramatic declines, for which scientists have found no obvious cause, whereas the Cretaceous-Tertiary extinction likely resulted from a cataclysmic asteroid impact.

Full biodiversity recovery time following past mass extinction ranges from 10 to 100 million years. If irreversible species loss, precipitated by the impact of human population, continues at its current rate through the 21st century, Earth risks losing as many as one third of all now-living species world-wide by the year 2100. Will we allow this to happen?