Home > Humanities and Sciences > Environmental Studies > A Walk Through Time > 75

Panel 75: All Creatures Great And Small 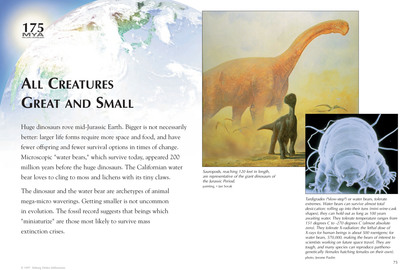 The dinosaur and the water bear are archetypes of animal mega-micro waverings. Getting smaller is not uncommon in evolution. The fossil record suggests that beings which "miniaturize" are those most likely to survive mass extinction crises.

Liebes, Sid; Mittelstadt, Laurie; Waugh, Barbara; and Brynes, Lois, "Panel 75: All Creatures Great And Small" (1997). A Walk Through Time - From Stardust To Us. 75.
https://scholarworks.umt.edu/awalkthroughtime/75