Home > Humanities and Sciences > Environmental Studies > A Walk Through Time > 80

Panel 80: Mammals Go Forth And Multiply 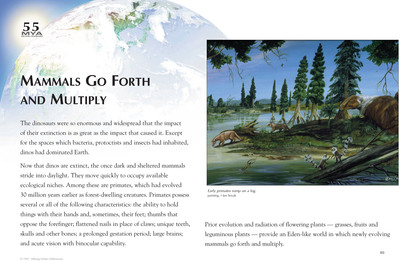 The dinosaurs were so enormous and widespread that the impact of their extinction is as great as the impact that caused it. Except for the spaces which bacteria, protoctists and insects had inhabited, dinos had dominated Earth.

Now that dinos are extinct, the once dark and sheltered mammals stride into daylight. They move quickly to occupy available ecological niches. Among these are primates, which had evolved 30 million years earlier as forest-dwelling creatures. Primates possess several or all of the following characteristics: the ability to hold things with their hands and, sometimes, their feet; thumbs that oppose the forefinger; flattened nails in place of claws; unique teeth, skulls and other bones; a prolonged gestation period; large brains; and acute vision with binocular capability.

Prior evolution and radiation of flowering plants — grasses, fruits and leguminous plants — provide an Eden-like world in which newly evolving mammals go forth and multiply.

Liebes, Sid; Mittelstadt, Laurie; Waugh, Barbara; and Brynes, Lois, "Panel 80: Mammals Go Forth And Multiply" (1997). A Walk Through Time - From Stardust To Us. 80.
https://scholarworks.umt.edu/awalkthroughtime/80