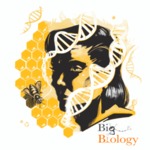 Are genes the primary units of selection and main drivers of adaptation? How does a gene’s-eye view of evolution fit into modern biology?

On this episode, we talk with Arvid Ågren, an evolutionary biologist and Wenner-Gren Fellow at Uppsala University, about his new book, “The Gene’s-Eye View of Evolution”. The book chronicles the history of gene-centric views of evolution, which burst onto the scene in 1976 with the publication of Richard Dawkins’s book, The Selfish Gene. In the gene-centric worldview, genes and alleles take center stage as both key units of selection and drivers of the evolutionary process. Organisms and their phenotypes, by contrast, are viewed as transient vehicles – disposable somas constructed and controlled by genes whose purpose is simply to help those genes replicate.

Previous guests on Big Biology, including Denis Walsh, Denis Noble, Mike Levin and others, have argued strongly for an opposing point of view: that organisms, not genes, should be the focal level for understanding evolution. On this episode, we challenge Arvid to reconcile the gene’s-eye view with our more organism-centered views, and to account for important biological phenomena like the origin of life and adaptation. Our conflicting perspectives led to a stimulating conversation about the nature of evolution, whether the abstractions inherent to the gene’s-eye view are justifiable, and how alternative conceptions of adaptation might lead to unification in biology.