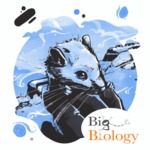 Episode 086: What the flux? The evolution of oxygen cascades

How do we properly study complex traits? How does organismal function relate to how organisms evolve?

All animals use oxygen to convert sugars and other substrates into energy using a multi-step pathway called the oxygen cascade. This cascade involves many, many parts of the respiratory, circulatory, and metabolic systems, making it a complex trait. Complex traits pose at least two major challenges to biologists: how do such multifaceted systems operate effectively and how do they evolve in the first place. Where does selection act in such systems: on the whole thing, on individual parts, or on the genes that underpin the functions of parts?

On this episode, we talk to Graham Scott, a physiologist from McMaster University who studies the oxygen cascade in mice living on mountaintops, extreme environments for such small organisms. We discuss the concept of symmorphosis, the function and evolution of the oxygen cascade, and several clever experiments involving rat marathons and mighty mountain mice.

This episode is sponsored by Journal of Experimental Biology. The journal is published by the Company of Biologists, a not-for-profit that has been supporting and inspiring the biological community since 1925. JEB is at the forefront of comparative physiology and biomechanics.