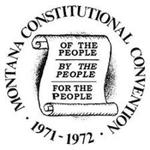 Dr. Robert E. Eagle of the University of Montana’s Department of Political Science discusses the history of constitutional conventions in the United States, then talks about their history in Montana. He provides background on what led to the 1972 Montana Constitutional Convention, citing issues with the former 1889 constitution, which due to Montana’s population and economic growth, no longer served the state well. Dr. Eagle describes the two study commissions—the Constitution Convention Commission and the Constitution Revision Commission—that were established by the Montana State Legislature prior to the public referendum that was held to vote on revising the state’s constitution. He describes the difference between the two study commissions. He then details the organization and structures of the constitutional convention, noting that there were introductory sessions for the 100 elected delegates and that much of the study commission materials were provided in advance to help the delegates do research. Dr. Eagle mentions that the convention’s records are available to the public, and notes the strengths and weaknesses of the new constitution, which was ratified on June 6, 1972.

Copyright to this collection is held by the interview participants. Permission may be required for use. For further information please contact Archives and Special Collections at the University of Montana, Mansfield Library.