Home > Humanities and Sciences > Environmental Studies > A Walk Through Time > 71 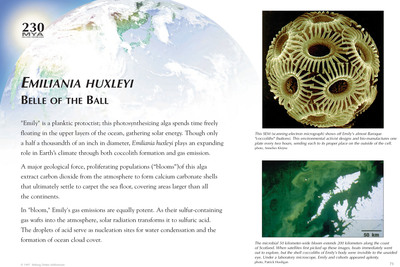 "Emily" is a planktic protoctist; this photosynthesizing alga spends time freely floating in the upper layers of the ocean, gathering solar energy. Though only a half a thousandth of an inch in diameter, Emiliania huxleyi plays an expanding role in Earth’s climate through both coccolith formation and gas emission.

A major geological force, proliferating populations (“blooms”) of this alga extract carbon dioxide from the atmosphere to form calcium carbonate shells that ultimately settle to carpet the sea floor, covering areas larger than all the continents.

In "bloom," Emily's gas emissions are equally potent. As their sulfur-containing gas wafts into the atmosphere, solar radiation transforms it to sulfuric acid. The droplets of acid serve as nucleation sites for water condensation and the formation of ocean cloud cover.

Liebes, Sid; Mittelstadt, Laurie; Waugh, Barbara; and Brynes, Lois, "Panel 71: Emiliania Huxleyi: Belle Of The Ball" (1997). A Walk Through Time - From Stardust To Us. 71.
https://scholarworks.umt.edu/awalkthroughtime/71