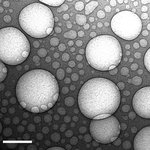 Episode 049: The Vital Question: The Chemistry of Early Life

How did life originate on Earth? Why is it that eukaryotes but not bacteria or archaea evolved large size and complicated body forms? How likely is that life has arisen independently elsewhere in the universe?

On this episode, we talk with Nick Lane, a biochemist and professor at University college London, about his 2015 book The Vital Question. Nick argues that protolife arose in alkaline hydrothermal vents deep in the early Earth’s oceans. The key early event was the evolution of metabolism powered by proton gradients. In other words, metabolism came first, and all of the rest of traits we think of as universal to life -- DNA, RNA, proteins, transcription, and translation -- came later. He also invokes an energetic perspective on the origin of eukaryotes, arguing that the acquisition of mitochondria distributed energy production through the cell volume, provided vastly more energy per gene, and allowed the dramatic expansion of eukaryotic genomes that in turn support the astonishing diversity of eukaryotic forms we see today.