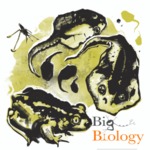 What roles does plasticity play in evolution? Where does novelty come from, and how does it become widespread in populations?

On this episode, we talk all things plasticity with David Pfennig, a professor at the University of North Carolina, and Nick Levis, a postdoc at Indiana University. Their research focuses on something they call plasticity-led evolution. Building on older ideas, David and Nick argue that novel environments release hidden, or cryptic, genetic variation in some individuals in a population, which in turn allow selection to act on trait variation that is only revealed as plasticity is induced.

We discuss these ideas using a fantastic real-world example: spadefoots. These burrowing amphibians have expanded into the American Southwest, and tadpoles of some species develop dramatically different morphologies depending on what’s available to eat in their early lives. If they eat pond scum, they tend to become placid omnivores, but if they eat meat, they become giant carnivores that devour other aquatic animals…and even each other.