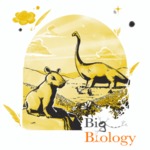 Episode 085: The rise of the mammals and fall of the dinosaurs

What makes a mammal a mammal? How did mammals survive the KT event when dinosaurs mostly went extinct? And why did mammals become so dominant?

When we think of the Cretaceous, or the Jurassic, we immediately think of dinosaurs. But mammals were there too! Although they weren’t the mammals you would recognize today. So, what is it that makes a mammal a mammal?

On this episode of Big Biology, we talk with Steve Brusatte, professor of Paleontology and Evolution at the University of Edinburgh. Steve is the author of a new book: The Rise and Reign of the Mammals, which charts the evolution of our own mammalian ancestors, from those living in the time of the dinosaurs, through mass extinctions, to the diversity of mammals that dominate Earth today. We also talk to Steve about some of the remarkable people behind the discoveries that comprise what we know today.

In the last half of the show, we talk about Steve’s previous book: The Rise and Fall of the Dinosaurs, which caught the attention of Colin Trevorrow, director of Jurassic World. Based on that book, Colin brought Steve on as the scientific advisor for the new film: Jurassic World Dominion. We chat with Steve about his role in the making of the film and what we can expect from the new dinos (spoiler: FEATHERS!)

Woods, Art and Martin, Marty, "Episode 085: The rise of the mammals and fall of the dinosaurs" (2022). BigBiology Podcasts. 86.
https://scholarworks.umt.edu/bigbiology_podcasts/86