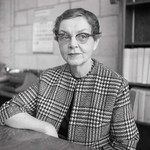 Lucile Speer reminisces on the final days of the 1971-1972 Montana Constitutional Convention. She notes that higher education issue was solved by a compromise of allowing the Montana Legislature to continue allocating a certain amount of the state’s budget for higher education, but creating a Board of Regents that determined how the money was spent. Speer recalls how a special committee was appointed for planning the final day of the convention with a closing ceremony that was open to the public. She offers a vivid account of how emotions ran high that day due to concerns from members and supporters of the Farm Bureau over changes to the constitution that they felt would hurt farming interests. Speer tells how Governor Forrest Anderson supported the constitution and got it signed before the Farm Bureau could file a suit against it. She recalls how every delegate signed the constitution, but that a number of delegates, particularly those from Eastern Montana, worked with the Farm Bureau to defeat it when it was put to the Montana public for a vote. Speer describes her frustration with Leo Graybill for referring to her as “Mrs.” rather than “Ms.” during the convention proceedings.