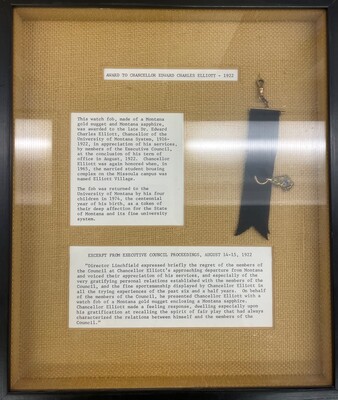 Watch Fob of black ribbon with a gold nugget and a sapphire. The fob is framed with 3 description points that read as follows:

"This watch fob, made of a Montana gold nugget and Montana Sapphire, was awarded to the late Dr. Edward Charles Elliott, Chancellor of the University of Montana System, 1916-1922. Chancellor Elliot was again honored when, in 1965, the marries student housing complex on the Missoula campus was named Elliot Village. The fob was returned to the University of Montana by his four children in 1974, the centennial year of his birth, as a token of their deep affection for the State of Montana and its fine university system."

Copyright to this object may be held by creator. For more information, please contact Archives and Special Collections at the University of Montana, Mansfield Library.